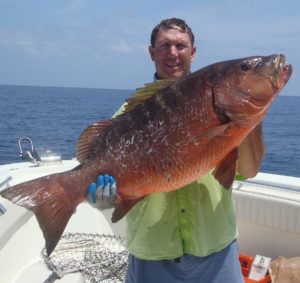 Cubera snapper, also known as Cuban snapper, inhabit the western Atlantic Ocean from Nova Scotia south to Brazil; however, it tends to frequent tropical waters.  This fish is the largest snapper in its geographical distribution.  Cubera snapper may often be confused with gray (mangrove) snapper because of its similar coloration.  It is dark to pale reddish gray.  This fish tends to have a slenderer body than other snappers.  Juveniles can have pale bars along their sides but these fade with age.  Comparatively little is known about this species of snapper.

Cubera snapper is rarely seen above Florida and in the Gulf of Mexico.  Adults are solitary reef-associated fish, inhabiting nearshore rocky ledges and overhangs.  To spawn, cubera snapper aggregate over deep water to release their eggs.  Spawning occurs in late summer in the Caribbean.  Eggs are released offshore, and pelagic larvae are carried by currents.  Juveniles shelter from predators in inshore mangrove and seagrass habitats.