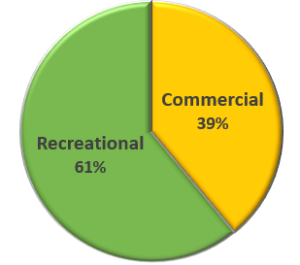 Gag grouper, or just “gag”, is typically found from North Carolina south to the Yucatan Peninsula.  There have been records of gag seen in Cuba, Bermuda and Brazil; however, they are rare.  Juveniles range as far north as Massachusetts.  Gag are absent in the Caribbean and Bahamas.  Coloration varies on gag depending on sex and age.  In general, gag is a gray to light brown with darker wavy markings that create a marbled look on the sides of the body.  Gag and black grouper look very similar.  The key difference between the two is a bone on part of the cheek region.  The preopercle, shaped like a boomerang, is the front most bone of the gill plate.  On a gag, it is angular with a serrated spur while on a black grouper it is evenly rounded.

Adults prefer coastal water structures such as reefs and rocky bottoms at depths up to 500 feet (152 meters).  Adults can be solitary or school in groups of up to 50 individuals.  Gag is commonly seen on rocky ledges in the Gulf of Mexico.  Spawning season and peak spawn times vary depending on the region.  Gag form spawning aggregations offshore in winter and early spring.  Females do not remain offshore year-round but instead, will form groups to migrate offshore to the males when it is time to spawn.4 Gag is a broadcast spawner with external fertilization, meaning males and females emit eggs and sperm into the water column during spawning.  Juveniles shelter in seagrasses, mangroves and oyster reefs before they become old enough to migrate offshore.  Gag displays protogynous hermaphroditism, meaning they begin life as females first then a portion of the population transitions to male.