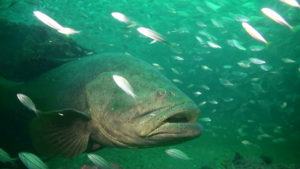 Goliath grouper occupies a wide geographic range, from Florida, including the Gulf of Mexico, Bahamas, and Caribbean Sea, south to Brazil.  It is also found in both the eastern Pacific and eastern Atlantic from Senegal to the Democratic Republic of the Congo; however, it is rare in the Canary Islands.  Based on a study done by Craig et al. (2009), results suggest that there are genetic differences between populations of goliath grouper in U.S. waters and those near Belize and Brazil.  This species of grouper tends to be easily recognizable, in part, because it is the largest grouper species in western Atlantic waters.  Its body is brownish yellow, gray or olive colored with irregular dark bars on its sides and small spots mostly on its head and fins.  The goliath grouper has a very broad head with small eyes; the spiny dorsal fin is very low, and much shorter than the second dorsal fin.  It also has a rounded fan-like tail fin.  Juveniles are a yellowish-orange color with dark irregular vertical bands and blotches on their sides.

The adult goliath grouper lives in shallow waters up to 328 feet (100 meters)6, over wrecks, corals or muddy or rocky bottoms.  This is one of the few grouper species also found in brackish water habitats.  Adults are territorial and occupy limited home ranges.  Juvenile and young-adult fish can be found around estuarine mangroves and oyster bars.  The typical spawning season is June through October; peak spawning within the Gulf of Mexico occurs from July through September.  Spawning occurs at night during a new moon.5 There is still some debate as to whether this fish transitions from female to male as there appears to be a lack of conclusive evidence that this species is a protogynous hermaphrodite.3