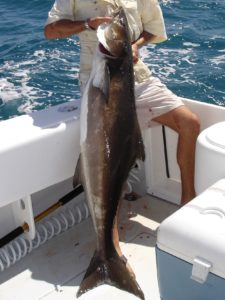 These values are expressed in MRIP-FES data currency

Cobia are the only member of their genus.  Cobia are long and slim with a broad, flat head.  The dorsal side of the fish is dark brown in color, while the ventral side is milky white.  The lateral line is dark and obvious, and runs through the eye to the forked tail.  Cobia have many small teeth in their mouths, and approximately eight short, unconnected spines between the head and dorsal fin.  According to stock characteristics the maximum age is 11 years, the maximum weight is 68 kg (150 pounds) whole weight, and the maximum length is 198 cm (78 inches) total length.

Cobia migrate seasonally, and can be found in the northern Gulf from March to October and in the southern Gulf and south Florida from November to March.  In the Gulf, spawning occurs in coastal waters from April to September at temperatures ranging from 23-28 °C (73-82 °F).  Cobia which are ready to spawn display a white horizontal stripe down each side of the body.  Eggs are found in the top meter (3 ft) of the water column, drifting with the currents, and are estimated to hatch within 36 hours.  From May to September, larvae are commonly found in surface waters, and occasionally at depths of up to 300 m (984 ft), where they likely feed on zooplankton.  Larvae transition to coastal and offshore waters as juveniles after approximately 25 days, often guided by currents, feeding on small fishes, squid, and shrimp. Adult cobia are found in coastal and offshore waters in depths up to 70 m (230 ft).  Adults feed on fishes and crustaceans, including crabs. 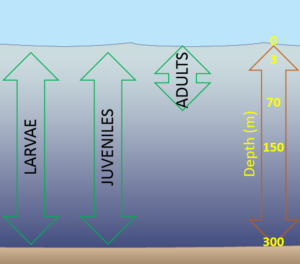