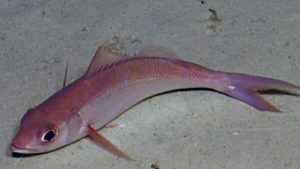 Queen snapper is distributed in continental shelf waters throughout the western Atlantic as far east as Bermuda, and from North Carolina south through eastern Brazil.  It is a dark red to pinkish red above its midline with a long, slender body.  The dorsal fin is spiny with a deep notch in the middle.  The tail fin is deeply forked.

Queen snapper is found deeper than other snapper species in the western Atlantic and Gulf of Mexico.  It appears to inhabit depths between 328 – 1640 feet (100 – 500 meters) based on angler observation.  Little scientific information exists on the life history characteristics of queen snapper compared to other snappers.  It reproduces throughout the year but, peak spawning is in October and November.5