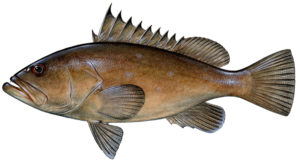 Warsaw grouper is found in the western Atlantic from Massachusetts to Florida, within the Gulf of Mexico, and south to Venezuela and Sao Paulo, Brazil.  Although it has been reported in the West Indies, it appears to be rare there.  This species of grouper is a uniform dark reddish-brown color to black on its back and sides.  This coloring fades to a dull red, grayish color below.  Warsaw grouper can look very similar to goliath grouper; however, the second spine on the dorsal fin of warsaw grouper is much taller than the other spines.  The warsaw grouper has a squared-off tail fin.  Juveniles have a yellowish tail fin and scattered pale spots on the body.

Warsaw grouper is a solitary species, preferring to be over rough rocky bottoms, typically at depths greater than 200 feet (> 60 meters).  Juveniles are found inshore around reefs and jetties.  There is little known about the reproductive behavior or spawning patterns of warsaw grouper.  Based on collected specimens, the estimated spawning season in the Gulf of Mexico is April to November.1   Based on current research, this grouper is likely a protogynous hermaphrodite, transitioning from female to male at some point in its adult life.