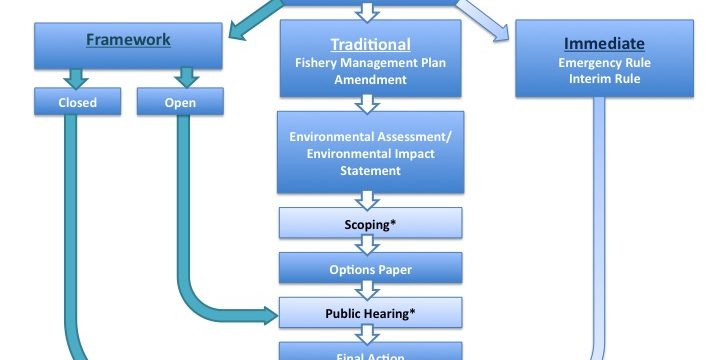 Ahoy,
Next week’s Council meeting in Corpus Christi, Texas will cover a number of topics that might be of interest. This diagram should help you figure out in what stage of the process each issue is. 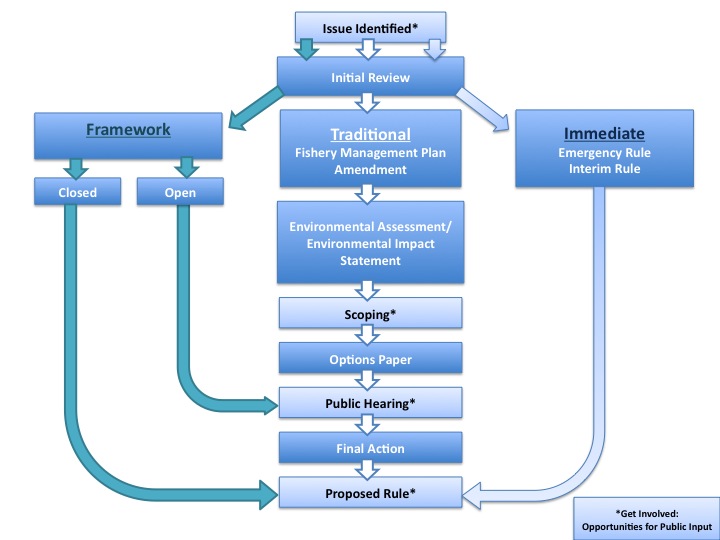 And, check out this video for a full explanation of the process.
I will be posting live updates on the Gulf Council’s Facebook page as the Council discusses current fishery management issues. Until then, here are some brief descriptions of what’s on the table.

If you have any questions don’t hesitate to contact me.

A review of the commercial red snapper Individual Fishing Quota system- The system has been in use for over 5 years, and is currently being reviewed by a panel of fishermen and scientists. At the meeting next week the Council will be updated on some of the findings from that review panel.
Commercial Reef Fish Individual Fishing Quotas- The Council will review a scoping document that begins to explore the possibility of developing a commercial Individual Fishing Quota program for all reef fish that are not currently included in such programs.
Check out the document here.
Grouper Allocation Scoping Document- Allocation is the division of an Annual Catch Limit between commercial and recreational fishing sectors. In 2006, the Council set temporary allocations for gag and red grouper; and the black grouper allocation was set for the first time last year. Currently the allocations are:
Next week, the Council will review a scoping document that begins to explore setting more permanent allocations for gag, red grouper, and black grouper.
Greater Amberjack- The Council plans to take final action on Amendment 35 which considers changing the Annual Catch Limit, recreational size limit and season closure, and commercial trip limits and seasons. The Councils current preferred alternatives would:
•                    Set the Annual Catch Limit at 1,780,000 pounds and the Annual Catch Target at 1,539,000 lbs.
•                Retain the recreational 30’’ minimum size limit and June-July season closure.
•                 Establish a 2000 lbs commercial trip limit and retain the March-May commercial season closure.
Check out the Amendment guide here.
Red Snapper Overage Adjustments- The Magnuson-Stevens Act recommends that species in a rebuilding plan have an overage adjustment. If a stocks Annual Catch Limit is exceeded then the overage adjustment would reduce the next year’s Annual Catch Limit by the amount of pounds it was exceeded. The Council will be reviewing a scoping document that considers adding overage adjustments to the red snapper fishery.
Gray Trigger-fish- The latest gray trigger-fish stock assessment determined that the stock is both over-fished (population is too low) and undergoing over-fishing (rate of removals is too high). The Gulf Council’s scientific advisors recommended that the gray trigger-fish Acceptable Biological Catch be set at 305,300 pounds. As a rule, Annual Catch Limit cannot be higher than the Acceptable Biological Catch, so the current stock Annual Catch Limit of 659,000 pounds must be adjusted. Just for reference the total trigger-fish catch from 2009 was 482,000 lbs and from 2010 was 352,000 lbs.
Next week, the Council will review an temporary rule that will reduce the gray trigger-fish Annual Catch Limit and Annual Catch Target to align them with the new Acceptable Biological catch, as well as adjust the Accountability Measures to provide in-season closure authority to the regional administrator of NOAA Fisheries.
The Council will also review and options paper for Amendment 37, which may adjust the Annual Catch Target and Annual Catch Limits after the temporary rule expires. It also considers adjusting the trigger-fish rebuilding plan by modifying management measures such as size limits and fishing seasons.
Check out the document here.
Sector Separation- The Council will continue to discuss issues relative to possible management scenarios that would separate the recreational sector into sub-sectors.
Costal Migratory Pelagic Options Papers- The Council will review the public comments received during scoping for two amendments. Amendment 19 addresses sale provisions and permit requirements for Cobia, kingfish, and Spanish mackerel. Amendment 20 addresses zone boundaries, trip limits, seasons, and identification for the commercial mackerel fishery.
A guide to amendment 19 is here.
A guide to amendment 20 is here.
Go to Top