Once again, we find ourselves at the end of one year and the
beginning of another.  In the fisheries
world, this means that we get to re-set our annual catch limits and start
harvesting anew.  For many of our “most
wanted” species the fishing season re-opens and will remain open until the 2017
annual catch limits are met.  Let’s take
a moment to reflect on this year’s harvest and then take a glimpse ahead to the
2017 fishing year and beyond.
This year we experienced quota closures for three of the fish
we manage; red snapper, gray triggerfish, and greater amberjack.  Not surprisingly, all three of these species
are considered to be overfished, and are currently in rebuilding plans.
This year’s recreational red snapper season opened on June 1
and closed on June 11th for private anglers, and on July 16th
for federal for-hire anglers. The commercial season for red snapper didn’t
close this year, nor is it likely to do so in the future, because the
commercial red snapper fishery is managed under an Individual Fishing Quota
program, rather than through traditional seasons.
Both gray triggerfish and greater amberjack closed to
recreational fishing on June 1 for the regularly scheduled closure, and never
re-opened because the recreational annual catch limits for both species had
already been met. The commercial season for greater amberjack closed on July 17th
after the commercial annual catch limit was harvested. The commercial
gray triggerfish season remained open for the duration of 2016 because the
commercial annual catch limit is not projected to be met.
You may be asking yourself why we are having trouble
managing these three species to ensure ample fishing opportunity, especially
since you’re seeing more of them now than you have in recent years, or possibly
ever.

Red snapper, greater amberjack, and gray triggerfish are all
rebuilding.  The stocks are rebounding,
but still require conservative catch limits.  A result of a rebuilding program is that as a
stock gets healthier and more abundant, fish become easier to catch.  As catch rates increase fishermen tend to
fish more often and new fishermen enter the fishery.  In addition, some stocks even expand their
range as they rebuild so more fishermen across the coast are able to access to them.
Once a shortened fishing season is
announced, fishing effort can intensify as some fishermen fish harder during
the open days.  Consequently, annual
catch limits are often harvested more quickly.

This issue is compounded further in rebuilding stocks that
are managed with a payback accountability measure.  If an annual catch limit is exceeded, then the
following year’s annual catch limit must be reduced to account for the overage;
further reducing the annual catch limit from the previous year.
This is exactly the cycle we are stuck in for gray
triggerfish.  In fact, there will be no recreational
gray triggerfish season in 2017 because the recreational harvest for 2016 is
estimated to double the annual catch limit.  The resulting payback has left the 2017
recreational sector with an annual catch limit too low to allow for any season
at all.
So, when do we expect these stocks to rebuild?  As of 1999, the federal law that oversees
fisheries management in the United States, the Magnuson-Stevens Act, mandates
that we rebuild overfished stocks within 10 years unless the biology of the
stock, other environmental conditions, or international agreements dictates
otherwise.
Red snapper has been in a rebuilding plan since the development
of the first Gulf reef fish management plan amendment in 1990.  This stock is an exception to the 10-year
rebuilding timeline because red snapper are such a long-lived fish.  The rebuilding timeline is set at the time it
would take to rebuild the stock in the absence of fishing mortality (estimated
12 years) plus one mean generation time (estimated 19.6 years). The rebuilding
plan was established in 2000 and is expected to rebuild the stock by 2032.
The greater amberjack rebuilding plan was initiated in 2003.
A 2014 stock assessment determined that
the stock continued to be overfished so, the Council set new annual catch
limits and increased in the minimum size limit for recreational anglers from 30
to 34 inches fork length. The stock is expected to rebuild by 2019 and the
Council expects to receive the results of a stock assessment update this year.
Gray triggerfish has been overfished since 2006.  A 2011 stock assessment indicated that the
stock was not rebuilding quickly enough to make the 10-year rebuilding timeline,
so the Council revised the gray triggerfish rebuilding plan. The Council
decreased annual catch limits and closed commercial and recreational sectors
during the spawning season in an attempt to rebuild by 2017.  A 2015, a stock assessment indicated that the gray
triggerfish is not rebuilding on schedule and continues to be overfished despite
efforts to rebuild.
The Council is currently working on Reef Fish Amendment 46,
which considers extending the rebuilding timeline for gray triggerfish.  The Council’s current preferred alternative is
to maintain the current  annual catch
limits and annual catch targets.  The
Council is also looking at modifying the closed season, bag limit, and
increasing the minimum size limit.
As you can expect, 2017 will bring another year of tough
limits for red snapper, greater amberjack, and gray triggerfish.  Our stocks continue to improve and we continue
to work towards finding management solutions that will provide the best
recreational and commercial fishing opportunities possible.
Of course, we do manage numerous other fish.  This chart showing unadjusted 2017 annual
catch limits and allocations for our most popular fish in the Gulf of Mexico
should lend some insight into the coming fishing year. 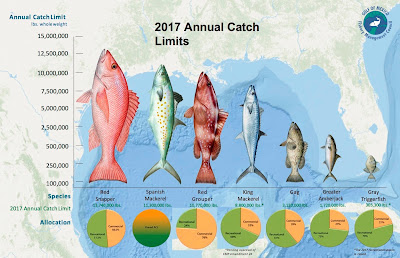 Similarly, this recreational season calendar
will show you which species you can target throughout the year. (Here is a PDF version to print) 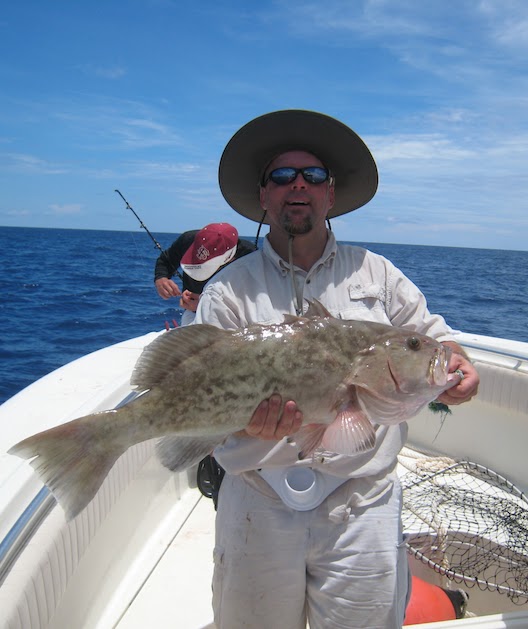 We continue to ask for your help and perspective as we make
tough fishery management decisions.  Please
visit the thermometer page on our website to learn what issues we are currently
addressing and submit your comments: https://gulfcouncil.org/fishery_management_plans/scoping-thru-implementation.php

As always, you’re welcome to contact us directly
at gulfcouncil@gulfcouncil.org
with any thoughts, questions, or concerns you may have.