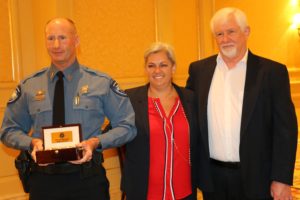 The Council’s Officer of the Year award acknowledges service above and beyond duty requirements and recognizes distinguished service, professionalism, and dedication to enforcing federal fishing regulations in the Gulf of Mexico. Nominees may be submitted from each of the five Gulf State Law Enforcement agencies, the U.S. Coast Guard, and NOAA Fisheries’ Office for Law Enforcement.

Officer Lipscomb spent his first 11 years with the Mississippi Department of Marine Resources as a fisheries technician serving as an unpaid Marine Patrol Reserve Officer. He transitioned to his position as a full-time enforcement officer in 2014 and has distinguished himself as a highly-productive, self-motivated law enforcement officer.

In 2016, Officer Lipscomb has made numerous fisheries violation referrals to NOAA. He led an investigation that seized illegally modified Turtle Excluder Devices from a federally permitted shrimping vessel and then later caught the same vessel for the same offence. He also cited a shrimper for possession of over two dozen illegal shark fins and discovered what was presumed to be a Goliath Grouper head during an inspection of a licensed seafood dealer.

In addition to his excellent service as a Marine Patrol Officer, Roy Lipscomb serves as a Sergeant First Class in the United States Army National Guard where he has been deployed to Iraq and Afghanistan. He is dedicated to serving his community and protecting the marine resources of the State of Mississippi and the Gulf of Mexico.

“Without officers like Roy Lipscomb, the department would not be able to achieve its dedicated mission to Enhance, Protect, and Conserve” said Keith Davis, Chief of Law Enforcement for MDMR.