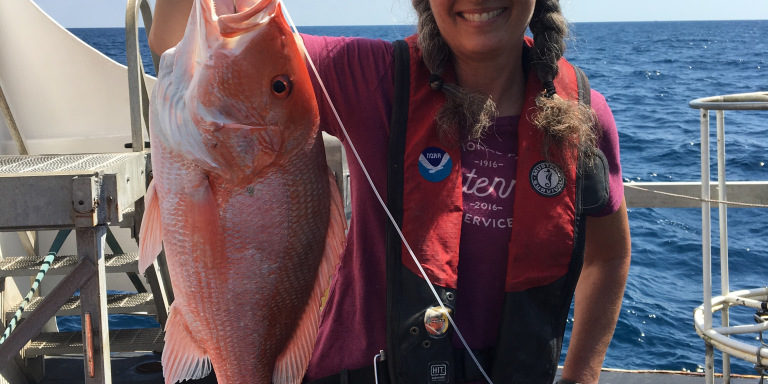 The Gulf of Mexico Fishery Management Council meets next week at the Marriott Courtyard in Gulfport, MS. You’re welcome to join us in person or you can watch a live broadcast of the meeting via webinar.
Public comment will be held on Thursday, April 19thfrom 12:30 – 3:30 CST. If you can’t testify in person, visit our ” amendments under development page” to submit your comments and learn about the different issues we’re working on.
Check out the meeting agenda and materials to prepare for the meeting. The following is a summary of some of the issues the Council plans to address:
Red Snapper
At the last meeting, the Council recommended that NOAA Fisheries approve Exempted Fishing Permits that would allow the States to manage a portion of the recreational red snapper quota for 2018 and 2019. The Council expects to hear an update on the status of those permits and learn the implications they will have on recreational red snapper season in the Gulf of Mexico.
The Council will also look at a draft amendment that considers permanently allowing each Gulf state to manage a portion of the recreational red snapper quota in federal waters.
View the Summary Document

Texas Document
Louisiana Document
Mississippi Document
Alabama Document
Florida Document
Submit Comments
Read Comments
For-Hire Management
Reef Fish Amendment 41 considers establishing an allocation-based program to manage reef fish for federally permitted charter vessels. Reef Fish Amendment 42 considers managing reef fish for the headboat vessels included in the Southeast Regional Headboat Survey. The Council will review the documents and be presented with decision tools that allows users to explore the current range of alternatives contained in the amendments.
Amendment 41
Submit Comments
Read Comments
Amendment 42
Submit Comments
Read Comments
Greater Amberjack
The Council will see a first draft of a framework action that considers making three modifications to greater amberjack management.
Currently, when the fishing year begins on August 1 the fishing seasons remain open continuously until the quota is met. Next week, the Council will consider recreational season specific quotas that allow a pre-determined portion of the quota to be harvested in each of the two different seasons.
The Council will also consider reducing the recreational bag limit of greater amberjack. While the current bag limit is 1 greater amberjack per person, reducing it further may reduce the harvest rate.
Finally, the Council will look at reducing the commercial trip limit which is expected to reduce the harvest rate and increase the length of the commercial season.
Document
Submit Comments
Read Comments
Coral
The Council will review a public hearing draft of Coral Amendment 9 which considers creating protections for 15 deep water areas in the Gulf that are known to have an abundance of corals and/or coral diversity that makes them unique. The Amendment also considers designating eight new areas for Habitat Area of Particular Concern (HAPC) Status without fishing regulations, and prohibiting dredge fishing in all existing HAPCs with regulations.  Public hearing meetings will be held across the Gulf in May and June to gather public opinion on the proposed changes before final action is taken.
Document
Submit Comments
Read Comments
Go to Top