The Gulf of Mexico Fishery Management Council met virtually from April 12-15, 2021. The Council began the meeting by making initial selections to populate its Reef Fish and Shrimp Advisory Panels. Potential appointees will be subject to background checks before final appointments are made during the June Council meeting. The Council heard a presentation on the portions of Executive Order: Tackling the Climate Crisis at Home and Abroad that impact Gulf fisheries. 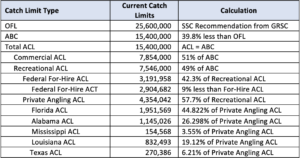 The Council also plans to have its Scientific and Statistical Committee review red snapper catch advice as soon as the final results of the Great Red Snapper Count (GRSC), additional information from a fishery-independent combined video survey, and a report from Louisiana Department of Wildlife and Fisheries can be considered. The Council specifically requested its SSC to consider the existing Acceptable Biological Catch Control Rule and National Standard Guidelines during its deliberations. 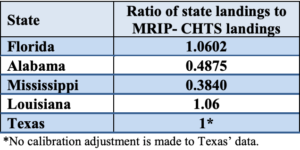 The Council recommended that NOAA Fisheries delay implementation of this framework action until January 1, 2023.  The Council will submit the proposed changes to the Secretary of Commerce for approval and implementation as soon as practicable.

The Council approved the annual Texas shrimp closure for 2021. The closure is part of a cooperative seasonal closure with the State of Texas and runs concurrent with its mid-season closure. The shrimp fishery is closed annually off Texas from mid-May to mid-July to allow shrimp to reach a larger and more valuable size prior to harvest.

Cellular electronic logbook units stopped transmitting shrimp effort data at the end of 2020. Those units on vessels are still collecting data, but shrimp permit holders will have to transfer effort data by mailing SanDisk cards to the Gulf States Marine Fisheries Commission in 2021, while a long-term solution for electronic transmission of data is being developed. After hearing a summary of an industry-led pilot program which would use P-Sea WindPlot to collect and report effort data, and hearing alternative options including traditional Vessel Monitoring Systems (VMS) or cellular based units, the Council initiated a Framework Action to set up reporting requirements and transition to a new platform to replace the expiring cellular electronic logbook program.

A recent update stock assessment for cobia showed that the stock is not overfished but is currently experiencing overfishing. The assessment used the new Marine Recreational Information Program’s Fishing Effort Survey (MRIP-FES) estimates which increased the estimates, of recreational catch and effort. Based on the assessment, the Council’s Scientific and Statistical Committee recommended new overfishing limits and acceptable biological catch levels for 2021-2023 and beyond.  While the assessment projections appear to allow for increased harvest, they actually represent an approximate 30% reduction from the current allowable harvest. The Council is obligated to end overfishing and consider updating cobia annual catch limits.

At this meeting, the Council worked on a draft of Costal Migratory Pelagics Amendment 32, which considers modifying cobia catch limits; apportionment between the Gulf and Florida East Coast (FLEC) Zones; sector allocations in the FLEC zone; and, management measures including possession limits, vessel/trip limits, and minimum size limits. The Council modified a preferred alternative so the Gulf group cobia daily possession limit would be 1-fish per person for the recreational sector and 2-fish per person for the commercial sector. The Council also selected preferred alternatives for South Atlantic actions that match those chosen by the South Atlantic Council and allow the South Atlantic Council to independently approve framework management measures that only affect fishing in their jurisdiction. The Council is expected to review a public hearing draft of this document at its June meeting.

The Council heard feedback from its Reef Fish and Coastal Migratory Advisory Panels on the development of an electronic logbook program for commercial fishing vessels in the Gulf of Mexico. The goal of electronic logbooks is to improve the accuracy and timeliness of the data reported by commercial fishermen. However, the panels voiced concerns about the increased burdens to the fleet. The Council emphasized that more engagement with the commercial fleet is appropriate to ensure that the industry has ample opportunity to provide input during program development.

The Council was presented with an update on the Southeast For-Hire Electronic Reporting Program. NOAA Fisheries reported that location monitoring requirements are scheduled to be implemented in December of 2021. The Council discussed concerns about what to do when location monitoring equipment fails. The Council initiated a framework action to allow for compliance in the event of equipment failures to ensure that for-hire and commercial trips are not delayed or canceled.

The Council heard a presentation on the biology and population of the Kemp’s ridley sea turtle. The number of nests, which are used as a proxy of population abundance, grew steadily until 2010, when large fluctuations in the nest counts were observed. The Council expressed support for assessing the Kemp’s Ridley sea turtle population, to include new environmental and demographic parameters, when time and funds allow.