Federal fishing regulations aren’t always easy to figure out, especially when you start to dig deeper than size, season, and bag limits. In this series of articles, we hope to clarify some commonly misunderstood regulations and possibly even shed some light on things you didn’t know you were allowed to do.

Today, we’ll focus on recreational aggregate bag limits. Most anglers know that a bag limit is the number of each fish species that you, as an individual, are allowed to harvest per day or possess. Aggregate bag limits are slightly different because they include several species of fish instead of just one. To complicate things even more, sometimes species in an aggregate also have their own bag limit.

We’re aware that these aggregate bag limits tend to cause some confusion, but the good news is that they allow you more freedom to mix and match the fish you bring home for dinner.  Most commonly, anglers believe that the aggregate bag limits apply to more species than they actually do and this probably leads some of you to retain less fish than you’re actually allowed to keep. We regularly hear that fishermen are under the impression that they’re only allowed to keep 20 reef fish total because we have a reef fish aggregate bag limit of 20. Keep reading to learn why that’s not entirely true.

In the federal waters of the Gulf of Mexico we have four different aggregate bag limits: Snappers, Reef Fish, Groupers, and Jacks. This table outlines the species in each aggregate and shows species specific bag limits within those aggregates: 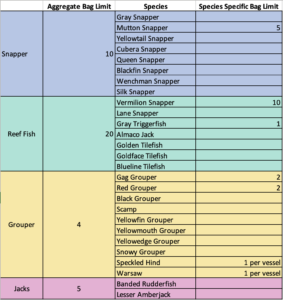 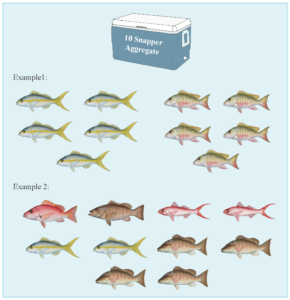 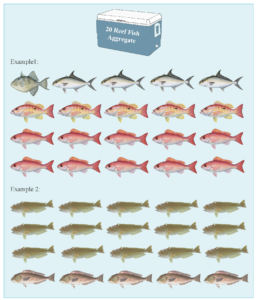 Fishing for Reef Fish: You can keep a combined total of 20 of the species considered to be part of the reef fish aggregate. Vermilion snapper and gray triggerfish both have individual bag limits, so you can’t keep more than 1 gray triggerfish and 10 vermilion snapper in a day. If you catch your limit of 10 vermilion and one gray triggerfish, that would leave the ability to harvest nine more fish to complete the 20fish per person combined total. Also, since the other reef fish species, like hogfish and greater amberjack, are not part of the reef fish aggregate, you could retain your bag limit of those species in addition to the 20-reef fish in the aggregate. 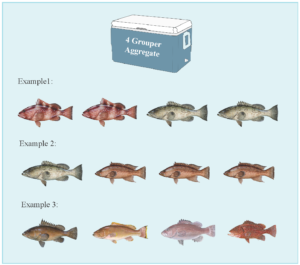 Fishing for Grouper: You can keep a combined total of 4 grouper species in the aggregate. Gag and red grouper also have individual bag limits, while speckled hind and warsaw have a vessel limit. All anglers on the vessel would be able to fish for their individual aggregate bag limit of 4 grouper per person, but only one speckled hind and one warsaw would be allowed on the vessel. 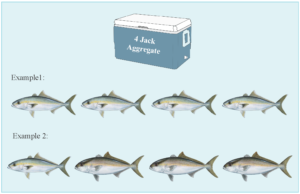 While aggregate bag limits can be somewhat confusing, they ultimately allow more freedom in what you catch. They allow you to mix and match your way to a full cooler. If you have any questions or concerns, please don’t hesitate to reach out to us at gulfcouncil@gulfcouncil.org