The Council also plans to have its Scientific and Statistical Committee review red snapper catch advice as soon as the final results of the Great Red Snapper Count (GRSC) and additional information from a fishery-independent combined video survey, and a report from Louisiana Department of Wildlife and Fisheries, can be considered. The Council specifically requested its SSC to consider the existing Acceptable Biological Catch Control Rule and National Standard Guidelines during its deliberation.

The Council also decided to adjust state-specific catch limits using the calibrations ratios developed by the Gulf States and NOAA’s Office of Science and Technology, and approved by the Council’s SSC, to allow state survey data to be converted to MRIP-CHTS ‘currency’. This will ensure that the data used to monitor harvest can be compared to the data used to set the annual catch limits. The calibration ratios are as follows: 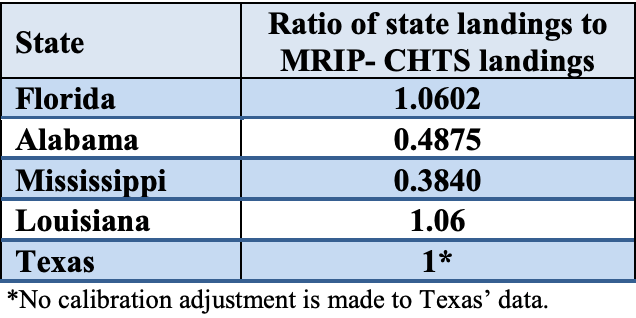 The Council recommended that NOAA Fisheries delay implementation of this framework action until January 1, 2023.  The Council will submit the proposed changes to the Secretary of Commerce for approval and implementation as soon as practicable.

How does this impact 2021 red snapper fishing season?

NOAA Fisheries sets the federally permitted for-hire fishing season. The Gulf states set the private angling recreational season in federal waters off each state. If approved, the proposed increase to the annual catch limit will be distributed among sectors based on existing allocations.  This framework action is expected to be implemented before the end of 2021.

Why is the overfishing limit set so much higher than the acceptable biological catch?

At its last meeting, the Council’s Scientific and Statistical Committee (SSC) reviewed the results of a catch analysis informed by the GRSC and an interim analysis of red snapper that uses the NMFS Bottom Longline Survey.  The GRSC-informed catch analysis showed a large increase in estimated red snapper biomass. However, the other interim analysis, which used the NMFS Bottom Longline Survey, showed a declining trend in abundance from 2016 – 2019.  As a result, the SSC defined the red snapper overfishing limit for 2021 as 25,600,000 pounds whole weight, based on the catch analysis informed by the GRSC.  However, due to uncertainty in estimates derived from the GRSC and the declining trend in abundance recognized by the NMFS Bottom Longline Survey, the SSC defined the acceptable biological catch limit as 15,400,000 pounds whole weight.

Can the Council set the annual catch limit any higher?

The Council is legally obligated to set the red snapper annual catch limit at or below the acceptable biological catch limit recommended by its SSC.

What is the timeline for the SSC review of red snapper catch advice and potential resulting management changes?

The meeting will be held after the Great Red Snapper Count is revised and finalized based on peer-review, and once the additional information from a fishery-independent combined video survey and report from the Louisiana Department of Wildlife and Fisheries become available. If red snapper catch advice is revised by the SSC, the Council could take final action to adjust catch levels later in 2021.

How/When will the results of the GRSC be incorporated into federal red snapper stock assessments and management?

The Council has decided to use the GRSC to revise the red snapper overfishing limit based on advice from its SSC during it March-April 2021 meeting. The Council has asked its SSC to also consider new information, including the finalized GRSC into for catch advice as practicable. The GRSC will be considered in the next red snapper stock assessment (SEDAR 74) which is scheduled to be completed in 2023.