The Gulf of Mexico Fishery Management Council will meet in-person in Ft. Myers, Florida. The meeting will convene June 21-24 at the Crown Plaza at Bell Tower Shops. You’re welcome to join us in-person or by webinar.

During this meeting, the Council plans to take final action on two issues: King Mackerel Catch Limits and Modifications to Location Reporting Requirements for For-Hire Vessels. The Council also plans to provide input to NOAA fisheries on development of an emergency rule that considers modifying commercial and recreational greater amberjack seasons, and an interim rule that will consider reducing fishing mortality and adjusting recreational fishing seasons for gag grouper. Both in-person and virtual attendees can provide public comment on Thursday, June 23, from 2:45-5:15 PM EDT. Instructions on how to provide testimony over the webinar can be found here.

The following is a brief outline of some of the issues the Council plans to address:

Update stock assessment determined that king mackerel is not overfished and is not experiencing overfishing, but also that the number of spawning fish in the stock is lower that what is needed to maintain the most healthy and fishable population. The update assessment used new recreational landings and effort estimates, which nearly doubled historic estimates of recreational harvest. Based on this, the Council’s Scientific and Statistical Committee (SSC) recommended modifying the king mackerel overfishing limit (OFL) and acceptable biological catch (ABC) levels through 2024.

During this meeting, the Council plans to take final action on a Framework Amendment 11: Modifications to Gulf of Mexico Migratory Group King Mackerel Catch Limits.

Because the recreational sector has historically harvested only a fraction of its annual catch limit, and because the commercial sector has historically harvested all or most of its annual catch limit, the Council will continue work on a draft of Amendment 33: Modifications to the Gulf of Mexico Migratory Group king Mackerel Sector Allocations.

The Council plans to take final action on a Framework Action to ensure that for-hire trips are not delayed or canceled in the event of Vessel Monitoring System equipment failures.

The Council will also begin work on a document that aims to ease the burden of making multiple trip declarations (hail-outs) when moving short distances for non-fishing trips. 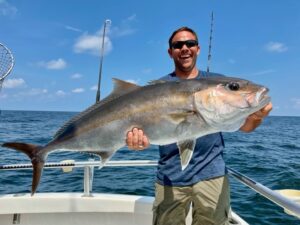 The most recent stock assessment (SEDAR 70 2020) determined that greater amberjack is both overfished and experiencing overfishing.  This is the sixth time that the greater amberjack stock has been assessed and determined to be overfished and experiencing overfishing since 2000.  In response to the stock assessment results, the Council’s SSC recommended a significant decrease in the overfishing limit and acceptable biological catch levels for greater amberjack.  Additionally, new recreational catch estimates indicated that recreational landings are greater than previously estimated and the Council is considering modifying sector allocations to account for this change in the estimate of historical participation by each sector.

The Council will continue work on Reef Fish Amendment 54: Modifications to Greater Amberjack Catch Limits and Sector Allocations.  The Council will also review and provide input on an emergency rule that aims to shorten this year’s commercial and recreational grater amberjack fishing seasons based on new catch level recommendations derived from the stock assessment. This will reduce the likelihood that overfishing will continue while the Council works on modifying catch limits and allocations.

The Council’s SSC updated red snapper catch advice based on a catch analysis that incorporates a study of red snapper absolute abundance off Louisiana and an analysis of Great Red Snapper Count-derived data for the other four Gulf states. The SSC modified its recommendation for the red snapper overfishing limit to 18,910,000 pounds whole weight and increased its recommendation for the red snapper acceptable biological catch to 16,310,000 pounds whole weight.  The Council will review options to update red snapper catch limits based on this new catch advice in a framework action at this June meeting. 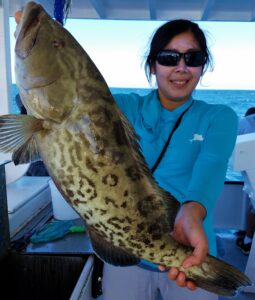 tified that the proportion of males in the gag grouper population is less than 2%, which negatively impacts the stock’s ability to reproduce.  The Council is obligated to end overfishing and develop a rebuilding plan for gag grouper, which will dramatically reduce catch limits during the beginning of the rebuilding period.  This rebuilding plan will need to consider revised catch limits, accountability measures, and other management measures.  However, this plan amendment won’t be in place until 2024, so NMFS is working to implement an interim rule to reduce harvest and end overfishing beginning January 1, 2023.  During this meeting, the Council will review analysis for the interim rule and may provide feedback on how to proceed.