Imposters! The Other Jacks and How to Identify Them

Greater amberjack is clearly the most targeted of the jack species in the Gulf. Mature greater amberjack are easy to discern from the others simply because they grow much larger than their jack family members.  The tricky part is differentiating jack species when they’re small and let’s be honest, it’s not easy, even for the most seasoned fishermen.  Since greater amberjacks are subject to a minimum size limit and seasonal closures, lesser amberjack and banded rudder fish are subject to a slot limit, and almaco jacks aren’t subject to any size or season limit, this guide should help ensure you don’t accidentally boat an illegal fish or, you don’t accidentally miss out on a keeper fish. 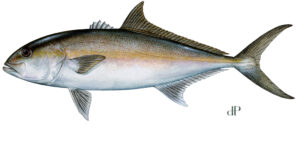 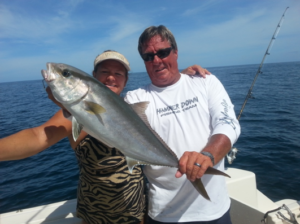 Lesser amberjack don’t get nearly as big as greater amberjack, and tend to max out at about 10 pounds.  Their dark stripe stops at the eye, and compared to their body size, their eyes are proportionally much larger than those of a greater amberjack.  Finally, their upper jawbone is a straight line that remains horizontal and they have 8 spines on their first dorsal fin. 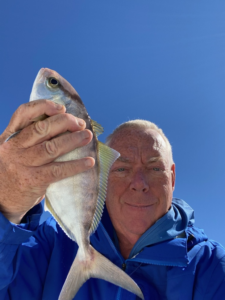 Banded rudderfish are not as common in the northern Gulf but can be found off Florida.  They aren’t usually as darkly colored as greater and lesser amberjack nor do they have the dark eye stripe. Instead, they tend to have a bluish sheen and white tips on the end of their tail and on the first dorsal have 8 spines. 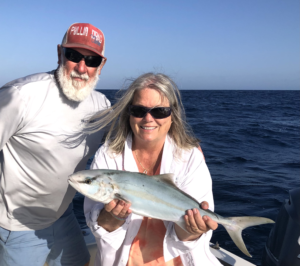 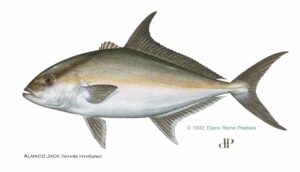 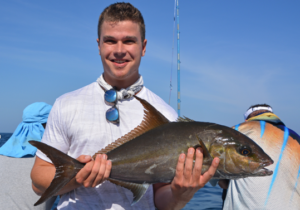 This guide developed by the Mississippi-Alabama Sea Grant Consortium (MASGP-22-038) and Mississippi State University Extension Service (3852). highlighting the differences between the jacks should help: 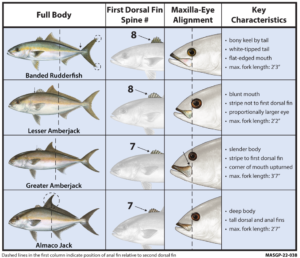 Also, check out this comprehensive identification resource for a deeper understanding of differences between the different jacks and a synopsis of the current Greater Amberjack Research Program that is underway: https://gulfseagrant.org/reef-fish-extension/greater-amberjack-research-program/

Knowing how to identify the jacks will help ensure that you don’t cheat yourself out of an extra fish.  It’ll also help you avoid accidentally harvesting a prohibited or improperly sized fish.  Now that you can tell them apart, find detailed commercial and recreational regulations on our fishing regulations webpage or on the recreational or commercial version of the Fish Rules Mobile App.