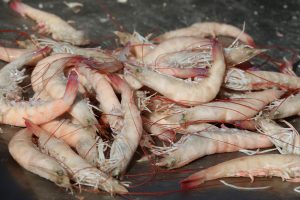 This amendment increases the allowable amount of shrimp trawl fishing effort in the area of federal waters monitored for juvenile red snapper bycatch. This area in shrimp statistical zones 10-21 is found in federal waters 10-30 fathoms deep roughly off the coasts of Mississippi, Louisiana, and Texas. The effort reduction threshold is set to 60% below the effort in baseline years 2001-2003. The amendment also reviews the shrimp fishery management plan framework procedure to allow changes to allowable fishing effort through an expedited process.

This amendment defines and aggregate maximum sustainable yield of 112,531,374 pounds of tails and an aggregate optimum yield of 85,761,596 pounds of tails. This amendment allows for the creation of a Federal Gulf shrimp reserve pool permit when certain conditions are met. It also sets minimum threshold number of active shrimp permits at 1072 and mandates that the Council convene a review panel to review the details of a permit pool if the number of permits reaches 1,175. This amendment also allows vessels possessing shrimp to transit through federal waters without a federal permit if their trawl doors and nets are out of the water the bag straps are removed.

Shrimp Amendment 17A extends the current Gulf commercial shrimp permit moratorium for 10 more years. The intent of this final rule and Amendment 17A is to protect federally managed Gulf shrimp stocks while promoting catch efficiency, economic efficiency, and stability in the fishery.

This amendment adjusts stock status determination criteria to be consistent with the new population metrics for penaeid shrimp. It also modifies the framework procedure for the Shrimp fishery management plan (FMP) to include changes to accountability measures (AM) for the royal red shrimp fishery through the standard documentation process for open framework actions, and make editorial changes to the framework procedure to reflect changes to the Council advisory committees and panels. AMs that could be implemented or changed would include:

The purpose of this action is to maintain the National Marine Fisheries Service’s (NMFS) ability to monitor and document offshore effort for the Gulf shrimp fleet through an electronic logbook (ELB) program. The need is to base conservation and management measures on the best scientific information available and to minimize bycatch to the extent practicable, as required by the Magnuson-Stevens Fishery Conservation and Management Act.

Amendment 14, part of Joint Reef Fish Amendment 27/Shrimp Amendment 14 was submitted to the National Oceanic and Atmospheric Administration (NOAA) Fisheries in June, 2007, and establishes a target reduction goal for juvenile red snapper mortality of 74% less than the benchmark years of 2001-2003, reducing that target goal to 67% beginning in 2011, eventually reducing the target to 60% by 2032. If necessary, a seasonal closure in the shrimp fishery will occur in conjunction with the annual Texas closure. The need for a closure will be determined by an annual evaluation by the National Marine Fisheries Service (NMFS) Regional Administrator.

The joint amendment also addresses overfishing and bycatch issues in both the red snapper directed fishery and the shrimp fishery. The amendment sets total allowable catch (TAC) at 5.0 mp between 2008 and 2010. The commercial sector will receive a quota of 2.55 mp, with the remaining quota of 2.45 mp going to the recreational sector. The amendment also reduces the commercial size limit to 13”, reduces the recreational bag limit to two fish, eliminates a bag limit for captain and crew aboard a for-hire vessel, and sets the recreational fishing season from June 1 – September 30 (which may be extended by approximately 30 days if the Council’s presumed assumption of a 10% post-hurricane reduction in recreational fishing effort is realized). In addition, all commercial and recreational reef fish fisheries will be required to use non-stainless steel circle hooks when using natural baits, as well as venting tools and dehooking devices.

The purpose of this regulatory amendment is to change the bycatch reduction certification criterion for red snapper from penaeid shrimp trawling in the exclusive economic zone (EEZ). Revising the bycatch reduction device (BRD) certification criterion to address shrimp trawl bycatch more comprehensively and realistically is expected to increase flexibility, promote innovation, and allow for the certification of a wider variety of BRDs. Having a wider variety of BRDs available to the fishery would allow fishermen to choose the most effective BRD for the specific local fishing conditions, and enhance overall finfish reduction.

Amendment 13 establishes an endorsement to the existing federal shrimp vessel permit for vessels harvesting royal red shrimp; (2) Defines maximum sustainable yield (MSY), optimum yield (OY), the overfishing threshold, and the overfished condition for royal red and penaeid shrimp stocks in the Gulf for stocks that currently lack such definitions; (3) Establishes bycatch reporting methodologies and improve collection of shrimping effort data in the exclusive economic zone; (4) Requires completion of a Gulf Shrimp Vessel and Gear Characterization Form; (5) Establishes a moratorium on the issuance of commercial shrimp vessel permits; and (6) Requires reporting and certification of landings during  a moratorium.

Action 10 would establishes a moratorium on the issuance of new commercial shrimp vessel permits, which would be a form of limited access.

Amendment 12 established two marine reserves in the exclusive economic zone (EEZ) in the vicinity of the Dry Tortugas, Florida known as Tortugas North and Tortugas south, in which fishing for coastal migratory pelagic species is prohibited. This action complements previous actions taken under the National Marine Sanctuaries Act.

Amendment 10 requires the installation of National Marine Fisheries Service (NMFS)-certified bycatch reduction devices (BRD) that reduce the bycatch of finfish by at least 30% by weight in each net used aboard vessels trawling for shrimp in the Gulf exclusive economic zone (EEZ) east of Cape San Blas, Florida (85° 30″ W. Longitude). Excepted are vessels trawling for groundfish or butterfish. A single try net with a headrope length of 16 feet or less per vessel and no more than two rigid-frame roller trawls limited to 16 feed or less, such as those used in the Big Bend area of Florida are also exempted.

Amendment 9 addresses the issue of reducing the bycatch of juvenile red snapper in the shrimp trawl fishery.

Amendment 8 addressed management of royal red shrimp. It established a procedure that allows total allowable catch (TAC) for royal red shrimp to be set up to 30 percent above Maximum Sustainable Yield (MSY) for no more than two consecutive years so that a better estimate of MSY can be determined.

Amendment 7, finalized in 1994, defined overfishing for white shrimp and provided for future updating of overfishing indices for brown, white, and pink shrimp as new data become available. A total allowable level of foreign fishing (TALFF) for royal red shrimp was eliminated; however, a redefinition of overfishing for this species was disapproved.

Amendment 6 (1993) eliminated the annual reports and reviews of the Tortugas Shrimp Sanctuary in favor of monitoring and an annual stock assessment. Three seasonally opened areas within the sanctuary continued to open seasonally, without need for annual action. A proposed definition of overfishing of white shrimp was rejected by National Marine Fisheries Service (NMFS) as not being based on the best available data.

In July 1989, National Marine Fisheries Service (NMFS) published revised guidelines for fishery management plans (FMP) that interpretatively addressed the Magnuson Act National Standards. These guidelines require each FMP to include a scientifically measurable definition of overfishing and an action plan to arrest overfishing should it occur. In 1990, Texas revised the period of its seasonal closure in Gulf waters from June 1 to July 15, to May 15 to July 15. The FMP did not have enough flexibility to adjust the cooperative closure of federal waters to accommodate this change, thus an amendment was required.

Amendment 5 also defined overfishing for Gulf brown, pink, and royal red shrimp and provided for measures to restore overfished stocks if overfishing should occur. Action on the definition of overfishing for white shrimp was deferred, and seabobs and rock shrimp were deleted from the management unit. This duration of the seasonal closure to shrimping off Texas was adjusted to conform with the changes in state regulations.

Amendment 4, partially approved in 1988 and finalized in 1989, identified problems that developed in the fishery and revised the objectives of the fishery management plan (FMP) accordingly. The annual review process for the Tortugas Sanctuary was simplified, and the Gulf of Mexico Fishery Managament Council’s (GMFMC) and Regional Administrator’s (RA) review for the Texas closure was extended to February 1st. Disapproved was a provision that white shrimp taken in the exclusive economic zone (EEZ) be landed in accordance with a state’s size/possession regulations to provide consistency and facilitate enforcement with the state of Louisiana. This latter action was to have been implemented at such time when Louisiana provided for an incidental catch of undersized white shrimp in the fishery for seabobs.

Amendment 1, approved in 1981, provided the Regional Administrator (RA) of the National Marine Fisheries Service (NMFS) with the authority to adjust by regulatory amendment the size of the Tortugas Sanctuary or the extent of the Texas closure, or to eliminate either closure for one year. It updated and revised the text of the fishery management plan (FMP).

The Shrimp Fishery Management Plan (FMP) was implemented as federal regulation May 20, 1981. The principal thrust of the plan was to enhance yield in volume and value by deferring harvest of small shrimp to provide for growth.