Am I Using Legal Bait or Should I Switch?

There are quite a few regulations that dictate what you can and cannot use as bait while fishing in federal waters or with federally managed species. Many of the regulations aren’t directly related to guidance on the use of species as bait, but do dictate harvest or possession specifications and control how species are treated once they’re on board. The following is a list of commonly asked questions related to the proper use of bait:

When do I have to use a circle hook? 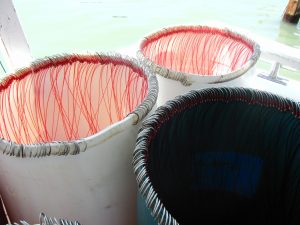 You are required to use non-stainless steel circle hooks when fishing for reef fish with natural baits. Circle hooks are not required when you’re using artificial baits like jigs and lures. If you plan to combine a natural and artificial bait, like a shrimp and jig combo, be sure to use a circle hook. The only exception to the circle hook/natural bait requirement applies to the commercial yellowtail snapper fishery south of Cape Sable (25°09′ North latitude in the Gulf) off the Florida Keys. Those fishermen target yellowtail by chumming them to the surface and harvesting them with cane poles, so they’re allowed to use j-hooks with natural bait.

Can I use vermilion snapper (aka Beeliners) or other reef fish as bait?

Can I use Spanish mackerel or other Coastal Migratory Pelagic species as bait? 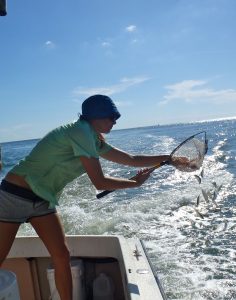 There is no specific prohibition on using Coastal Migratory Pelagic species as bait, which includes Spanish mackerel, king mackerel, and cobia. However, finfish

must be maintained with heads and fins intact and minimum size limits and possession limits still apply. If you do want to use one for bait, make sure it’s of legal size and maintained in whole condition.

Can I use fish guts or carcasses as bait?

There are no rules preventing the use of fish guts as bait. However, the rule governing whether you can use fish carcasses as bait is clear: all finfish harvested from federal waters must be maintained with heads and fins intact. Remember to keep these important things in mind: 1. This rule applies broadly to finfish, not just species designated as reef fish, coastal migratory or highly migratory species.  2. This applies even if you’re considering bringing fish carcasses that you’ve landed and cleaned on a subsequent fishing trip to use as bait. In such a case, the heads and fins intact regulation makes using fish carcasses illegal. There are afew exceptions that would allow for limited use of fish carcasses as bait. You may use packaged, headless fish fillets that have the skin attached and are frozen, refrigerated, or held in brine. You may also use small pieces or strips of carcass (no

larger than 3×9 inches) that have skin attached and are frozen, refrigerated, or held in brine. Finally, the filleted carcasses and guts of Gulf reef fish can be used as bait in trap fisheries for blue crab, stone crab, deep-water crab, and spiny lobster as long as it’s purchased from a fish processor. Using your own harvested reef fish carcasses is not legal. 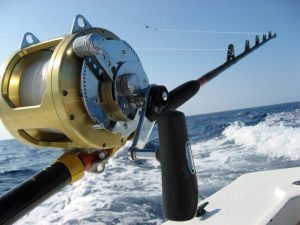 Can I use spiny lobster as bait?

This one is a bit tricky because spiny lobster cannot be harvested with a spear or hook and in the Gulf, possession of a speared, pierced, or punctured lobster is considered evidence that prohibited gear was used to harvest lobster. However, there is an exception for spiny lobster punctured by a hook used to hook-and-line fish for other species as long as no prohibited gear, suc

h as a spear or speargun, is on board the vessel simultaneously. Also, the lobster you’re using will have to be legal harvested (in-season, carapace no smaller than 3-inches, and not egg bearing) and in whole condition.

Can I use shark as bait?

Sharks cannot be used as bait in federal waters. Similarly, any vessel  possessing an Atlantic highly migratory species (HMS) permit, even if the vessel is in state waters, cannot use sharks as bait. In order to possess HMS, such as sharks on bo 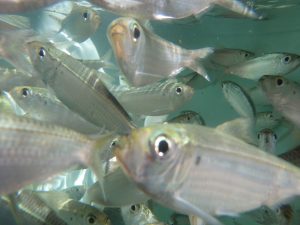 ard a vessel, both commercial and recreational fishermen must have an appropriate federal HMS permit. Sharks must be maintained in whole condition except for removal of

the guts to bleed the shark (commercial vessels may also remove the head but this is prohibited for recreational vessels). Once a shark is removed from a vessel and cut up in any fashion, it cannot be put back on board the vessel. There is no exception for shark carcasses that are purchased from a processor. The use of sharks as bait in state waters by vessels without a federal HMS permit is regulated by the states, and fishermen should check their respective state’s regulations.