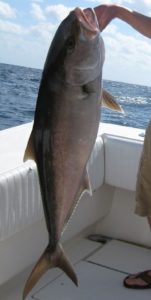 Note: To monitor the Annual Catch Limit, the fishing year is August 1 – July 31. 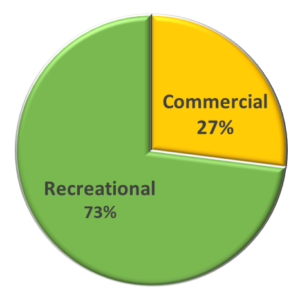 Greater amberjack are a member of the jack family (Carangidae).  They are typically a silvery-blue, with yellow shading along the lateral line, and a dark brown diagonal band through the eye.  Their tail is deeply forked.  The Gulf of Mexico stock is thought to be distinct from the Atlantic.  Greater amberjack are a reef-associated species typically caught between depths of 59 to 236 ft (18 and 72 m).  Greater amberjack in the Gulf are presently considered overfished and experiencing overfishing (SEDAR 33 2014)

Greater amberjack are found in the Atlantic, Pacific, and Indian Oceans, and the Mediterranean Sea in temperate to tropical waters. The maximum observed age is 15 years, the maximum weight is 178 pounds whole weight, and the maximum length is 58 inches fork length.  Females grow to larger maximum sizes than males.  Peak spawning occurs in March and April in the Gulf.  After a brief pelagic stage, newly hatched larva and small juveniles often associate with floating Sargassum.  Larger juveniles shift to demersal habitats, where they congregate around reefs, rocky outcrops, and wrecks.  Adult greater amberjack are found on both artificial and natural reefs (SEDAR 33, 2014).